Archive for the ‘Concrete Patching’ Category

Asphalt vs Concrete: Which paving material should you use?

It can be hard to know whether to use concrete or asphalt pavement when performing repairs. Neither material is better than the other, and some are ideal for specific projects. When deciding between concrete vs asphalt roads or parking lots, you’ll need to consider a few pros and cons.

Often, people choose their paving material based on upfront costs. Many people want an economical or cheap solution. Sometimes the right pavement choice can also be a bargain; however, this is not always the case. The costs of concrete and asphalt fluctuate regularly, you will end up with a short-term solution and added material costs if you select a paving material that satisfies your wallet but not your paving needs.

END_OF_DOCUMENT_TOKEN_TO_BE_REPLACED

Posted on: February 9th, 2015 by uniquepaving 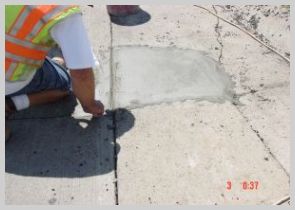 The most frequent construction-related causes of partial-depth concrete patch failure include the following:

Failure to square the hole:

The shape of repair is important. Repairs should always be square or rectangular. Long, narrow repairs have a much greater tendency to crack than even sided (square) repairs.

Failure to remove all deteriorated material:

Good surface preparation is critical for durable repairs. When a repair material is placed on a dusty or dirty surface it will bond to the dust. This is not good! Make sure the surface is clean of all contaminants including oils, sealers, debris, etc. and has a rough profile.

Failure to re-establish the joint:

This will cause compression failure. If you start a repair with a joint(s) the repair needs To be finished with the joint(s).

Variability of the repair material:

Old material (especially in bags) loses its performance and strength characteristics over time.

Deep repairs need to be rodded or vibrated to ensure all air pockets are removed.

We’re confident that our line of high-quality concrete repair products will meet all of your needs! Here’s a recent ad that details all of our concrete solutions, from High-Performance Fast Set to Anchor Cement. We cover the full spectrum! 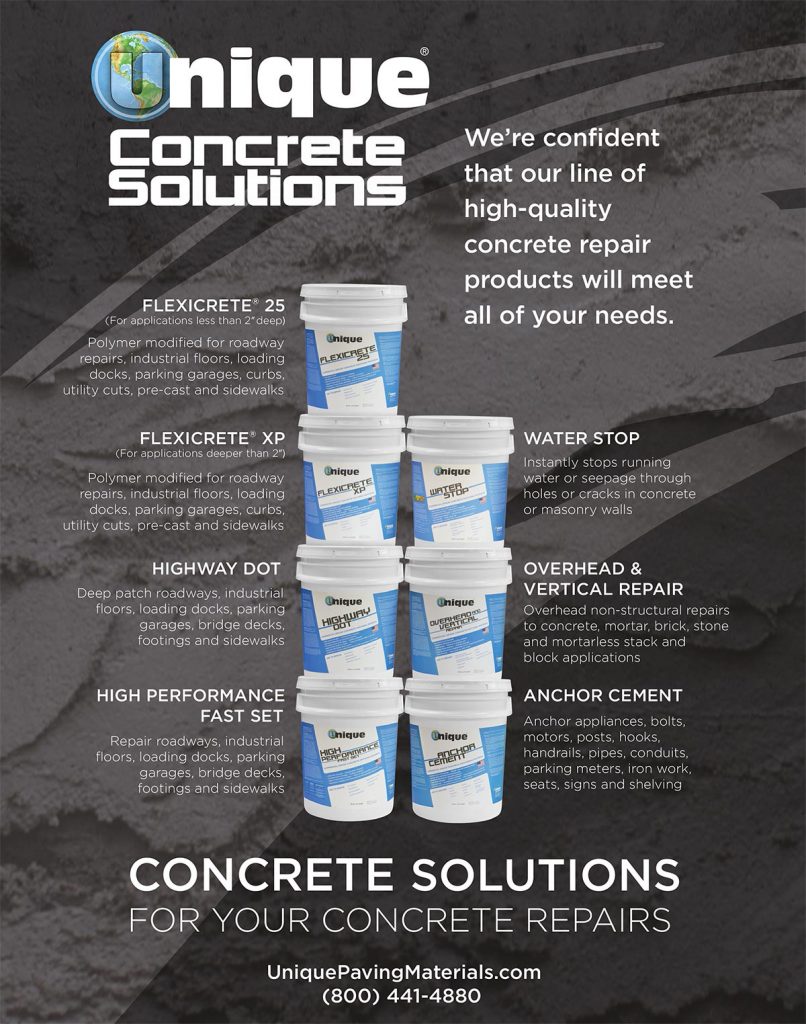 The History of Concrete

Concrete, originally composed of crushed limestone, is an essential fixture of the modern world. Used to build skyscrapers, dams, and airplane hangars—to name a few—it has shaped human history in an influential way. Concrete is sometimes regarded as a simple material, but its complex history proves otherwise. The advances throughout history have also lent much in the way of concrete repair and maintenance.

In fact, the remains of the first concrete-like buildings—created by Nabataea traders in 6500 B.C.—still stand today. Their ability to create concrete allowed the Nabataea tribes to persevere in desert conditions. 500 years later the Romans caught onto the Nabataea secrets. Both of these cultures had local access to fine silica sand, allowing them to waterproof their cement creations. Nabataea cement buildings closely resemble modern cement buildings. Romans, on the other hand, used a unique building process. Rather than pouring concrete into molds to make one smooth, finished product, they cobbled stones together and filled in the gaps with mortar.

By 200 BC, this building process was very successful and was used for most of the contemporary Roman structures. Romans also devised the first substantial uses of cementitious binding agents—harena fossicia and Pozzuolana—to build their more skillful structures as well as those that came into contact with water. Overall, the advances in cement mixtures and concrete built structures proved the Romans to be one of the most influential cultures in the development of concrete.

Much has changed since the era of the Romans, though, and we now have access to much more reliable, advanced concrete technology. Portland cement is now used to make concrete, which can be manufactured to precise instruction. It was initially produced in the early 1860s and is still popular today. Considered rudimentary and unsophisticated, Portland cement was rarely used for anything by industrial buildings at first.

We have compiled a time line of influential moments in concrete history from the development of Portland cement into the present day:

• 1875: The first home built from concrete, Ward’s Castle, was completed
• 1877: Construction using steel-reinforced concrete first began
• 1891: The first concrete street was completed in the U.S.
• 1904: The Ingalls Building was built, making it the first high-rise constructed with concrete
• 1917: The standard formula for Portland cement was conceived
• 1930: Air-entraining developments increased usability and resistance to extreme cold
• 1935: The Hoover Damn was completed, requiring 4,360,000 total yards of concrete
• 2011: The world’s tallest building, the Burj Khalifa, was built with reinforced concrete

As you can see, concrete has had a long and varied history. Some of the world’s most memorable sights have concrete to thank for their longevity and prominence, not to mention its important role as a utilitarian material found in countless everyday structures. Learn about the unique history of asphalt, another vital construction material, from Unique Paving Materials.

Drafty Pipes are No Match for UNIQUE Water Stop!

Posted on: February 7th, 2014 by uniquepaving

UNIQUE® Water Stop is a great and versatile product. Water Stop can be used for more than just stopping active and underwater cracks or leaks! Just ask us at UNIQUE!

We noticed our conference room was feeling rather drafty during the recent cold spell.

After some investigation, we realized the cause was due to gaping holes around some exposed pipe! Lucky for us, we have plenty of UNIQUE Water Stop in stock to solve the problem.

After mixing the amount of UNIQUE Water Stop necessary for the repair, cardboard was used as a backer base for the patch.

Water stop was placed around the repair until it completely sealed the hole.

How to Protect Yourself from Driveway Repair and Asphalt Paving Scams 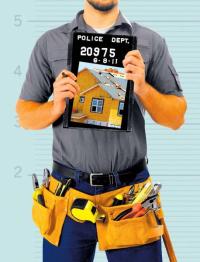 Most home improvement contractors are reputable people who do a professional job for fair prices. But if you’re thinking of hiring someone to repair your driveway (asphalt paving or concrete patching), you should take a few simple steps to ensure that you aren’t taken advantage of by a disreputable contractor.

Driveway repair is one of the most common improvement projects that untrustworthy contractors target in order to scam homeowners (for one of the many examples of driveway repair fraud arrests, check out this arrest report.) When spring arrives every year, many people discover that their driveway has developed cracks, and getting repaved or patched becomes a priority. Unfortunately, many homeowners don’t do some very easy homework before paying a contractor to fix their driveways, and they end up getting shoddy repair work (or worse).

Before you hire a local asphalt repair or concrete patching contractor, make sure to get references from them from nearby homeowners who have used their services. Take some time to make sure that their required local licensing, insurance and bonding is up-to-date and legitimate. And remember: NEVER allow a contractor to start work until all agreed-upon services and charges are put into writing.

Another tip that will help out if something ends up going wrong: if you can, be sure to pay by credit card instead of cash or check. When you pay by credit card, you will have more options for recouping your money if you end up getting cheated. 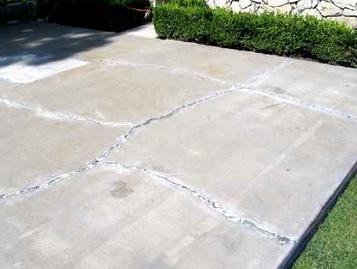 If a contractor insists that you pay in cash, tells you that you need to decide on services right away, or if they are from out of state, be very cautious. All of these are red flags for scammers. Professional contractors usually accept credit cards or checks, and have no problem providing you with an estimate on services that does not require immediate approval.

Another warning sign that most homeowners don’t watch for: be suspicious of contractors who say that they can give you a cheaper price because they have “leftover materials” from other repair jobs. An experienced concrete patching or driveway repair company almost never has leftover materials, because they know exactly how much asphalt paving or concrete patching product is needed for a specific job.

For more great advice on how to spot driveway repair scammers, you can check out this great article from the Better Business Bureau.

If you end up dealing with a contractor who you think might trying to scam you, it’s a good idea to make a call to the police and file a report. Not only will you be protecting yourself, but you’ll also be saving other local homeowners from falling victim to the same scammer in the future.